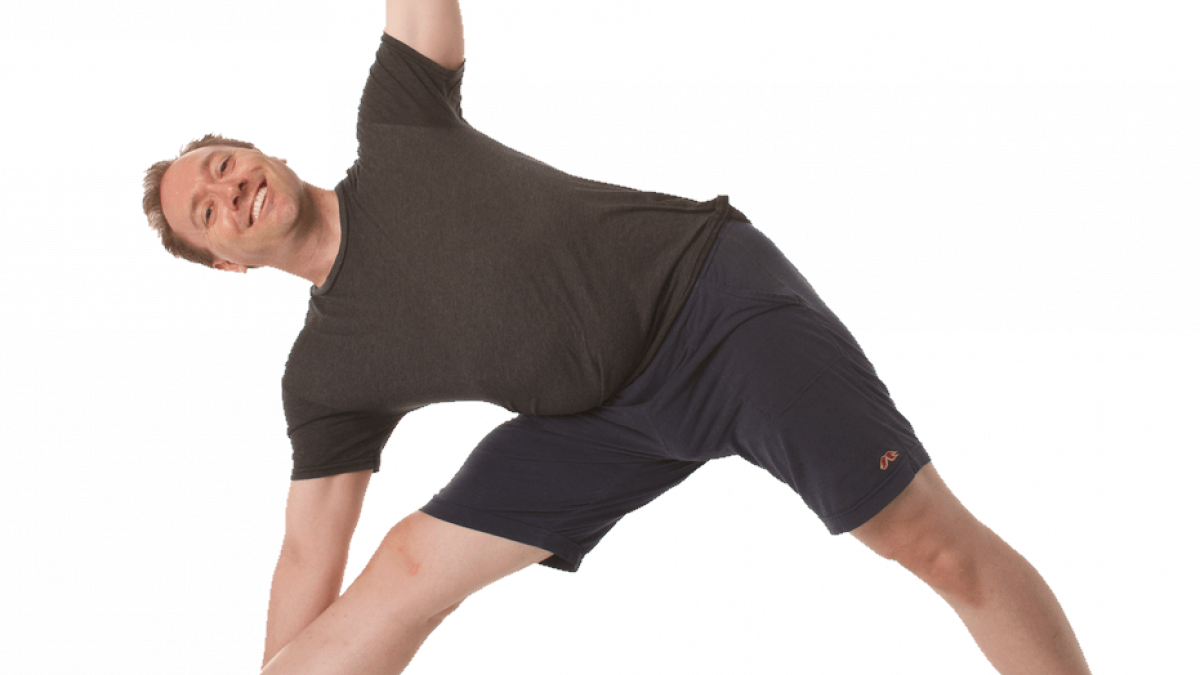 Many years ago I was in a workshop with Rodney Yee, and one of the students asked,

"Rodney, can you tell me the right way to do trikonasana? It seems that in every class I take the teacher says something different, and I'm no longer sure of the correct way to practice."

I was expecting him to lead us into an exploration of the most skillful way to practice, but instead he asked her to show him one way to practice trikonasana and then to tell him the benefits of practicing it that way. And then he asked for another example, and again asked about the benefits of practicing that way. The point he was making was that there isn't a right or wrong way to practice trikonasana or any other pose for that matter... but different choices within each posture would have pros and cons. This was eye opening for me at the time, because I, like most new yoga students, assumed that yoga postures were handed down from the Yoga Gods and that there was a right way to practice them in order to derive the most benefit on a physical and energetic level. However, what he said made total sense and I loved learning a point of view on the subject that seemed so non-dogmatic. In this post, we'll look at the Iyengar and Satchidananda versions of trikonasana and explore the benefits, challenges and considerations of each.

Let's first look at BKS Iyengar' expression of trikonasana, as presented in Light on Yoga. Of course, the way that this posture is currently practiced in the Iyengar tradition might vary somewhat, but in the image of Mr. Iyengar to the right we can make some observations and discuss the benefits and challenges of the alignment choices as they are being expressed.

The Back Leg & Foot

Based on the all of the above joint actions, I would say that the main musculoskeletal and energetic benefits of Iyengar's trikonasana include:

Swami Satchidananda is the founder of The Integral Yoga Institute (the IYI), where I first began my study and practice of yoga back in the early 90s. The image of him on the right is from the book that I received in the Hatha I teacher training, entitled Integral Yoga Hatha. Trikonasana is practiced very differently today at the IYI, with a longer stride, the foot pointing forward, and generally with more "Iyengar-like" alignment cues. But this variation is probably still out there being practiced by old-school yogis within the Integral and Sivananda styles, where students might be cued to "square the hips toward the side wall" in order to emphasize the stretch along the side body.

The Back Leg & Foot

Based on the all of the above joint actions, I would say that the main musculoskeletal and energetic benefits are:

When I first learned this variation at the IYI, I think I got caught in a transition between the way Satchidananda is shown practicing this posture and the evolution of the posture to be more "Iyengar-like." We were still taught a shorter stride and there was an emphasis on "squaring the pelvis to the side," however, we also received the cue to point the front foot straight forward. This is problematic, because if you attempt to square the pelvis to the side while at the same time pointing the foot straight forward, you will either create compression in the front hip between the neck of the femur and the posterior aspect of the acetabular labrum, or you'll create excessive torque in the front knee. Try this and see for yourself, but make sure that you don't work it too hard! By allowing the front foot to turn inward slightly, as Satchidananda does, you avoid these biomechanical stressors and can more safely work to square the hips to the side... which lends to a greater stretch along the outer hip and side waist.

CONCLUSION: THERE IS NO "RIGHT" WAY!

I only chose to illustrate two different ways of practicing trikonasana... but of course there are countless others! Just looking at variations within the Iyengar version of trikonasana, you could:

When all is said and done, I think that there is a lot of value in practicing several different variations of trikonasana in order to diversify the practice and receive more benefit from the posture. I also think it's good to know what benefits that you're going for when you practice, so that you can tweak the posture in a way that allows you to more fully attain those benefits.

As a final note, while the Iyengar variation is my go to, if you've never practiced a Satchidananda trikonasana (as pictured above), it feels fantastic and I highly recommend that you practice and teach it from time to time ;-) 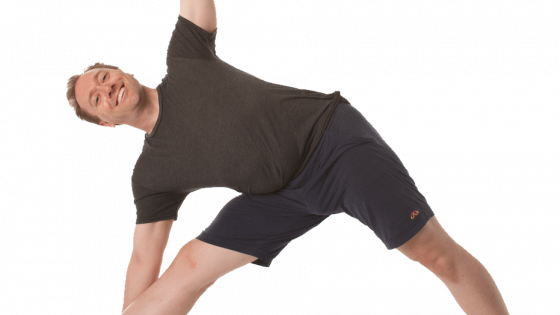 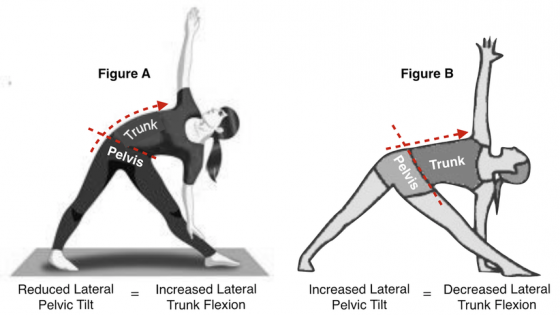 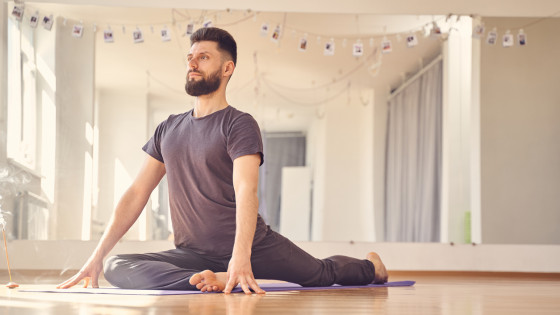 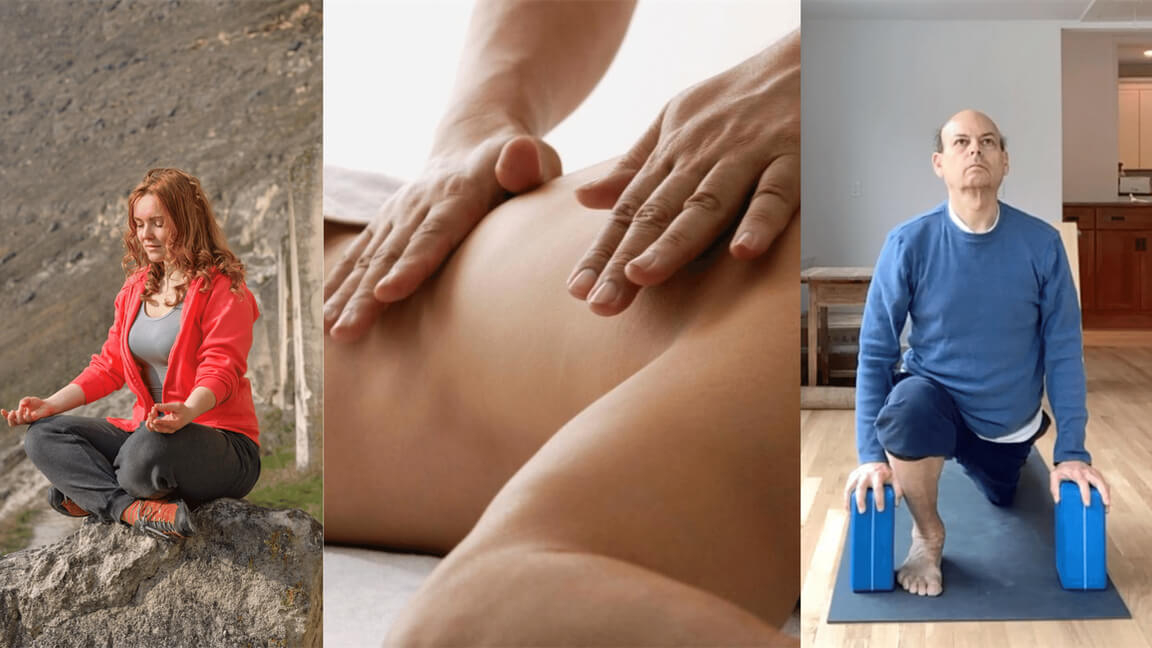